January 2013 brought Cyclone Oswald. As well as rain in excess of 400 mms there were strong winds over several days. At the height of the storm the cyclone tore at the vegetation such that showers of leaves, bark, branches rained down from the sky. Instead of buying woodchip or getting our own trees mulched we were able to gather up this plant debris and spread it over garden beds. Admittedly it was a time-consuming and labour-intensive task but very rewarding. 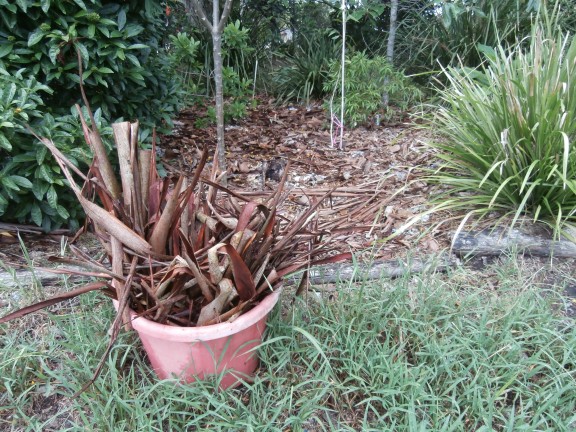 Some trees were uprooted – a macadamia and 2 wattles – but Ian lopped off branches and also spread them around e.g. in an area between a fence and a row of plants where he is unable to mow. 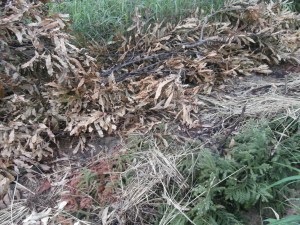 keeping down the grass

Recently we have reclaimed an area in the side paddock for planting lomandras and barbed wire grass. 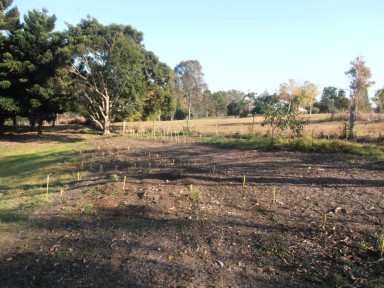 a new site for plants

As the plants grow we will be spreading leaves, dead tussocks of grass, bark, twigs and even Poinciana seed pods (minus the seeds!) between the new rows.

These layers of vegetation will block out the sunlight between the new plants and thus prevent weeds and guinea grass from growing in the bare spaces of dirt. 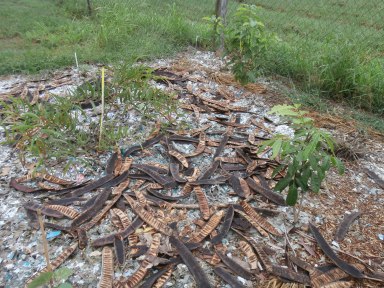 In the past we have used carpet as a base for spreading wood-chip. It is possible to buy jute instead of old carpet but of course this costs a lot more!

mixture of wood-chip and jute over a large area

The photo below shows an area where we had removed scrappy bushes exposing dry soil. We covered this with jute and planted some natives. The jute inhibits the weeds and retains the moisture so that the plants are protected and are growing quite fast even though the soil appeared to be poor. Since then we have been spreading more and more layers of mulch over the jute- leaves, bark, dead weeds and twigs.

jute rectangle being covered with mulch as a base for plants

We also mulched up hundreds of branchlets that had been gathered over a period of time – and which turned into a surprisingly small amount of mulch – and deposited this over other gardens. There are so many other sources of mulch material – old cushion covers, old clothing, old recyclable bags, corks, doormats made from natural fibres … which all eventually provide

1.nutrients for the soil and plants 2. protection from the drying affects of wind and sun         3. freedom from weeds 4. less frequent watering 5. less areas to be mown. 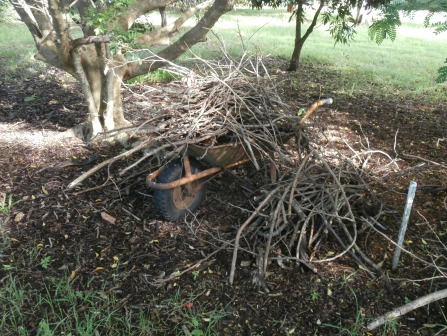 sticks waiting to be mulched

Actually we are only trying to replicate how the Australian bush lays down a covering of fallen leaves, bark, shrubs, branches and trees all which break down to provide optimum conditions for plant growth.

This entry was posted in Diary: Rain and Planting and Observations of Wildlife and tagged cyclone, mulch. Bookmark the permalink.