To deal with paralysis ticks we have tried buying guinea fowl but so far their diet of ticks must be miniscule. When we go out gardening we apply insect repellent to our hats as well as our bodies – but we still get a tick every now and then. We treat this by spraying either

onto a cotton wool ball and hold it over the tick until it dies.  Later we put the tip of  tweezers as close as possible to the point of attachment and pull it out easily!

It is only the female ticks which have a a kind of beak for burrowing into the skin and sucking the blood. Baby ticks and male ticks may wander over your body and can be flicked off. This crude drawing emphasises the beak of the female tick.

Recently my wife and I escorted our faithful and wise Land for Wildlife officer on his annual review of progress in restoring wildlife habitats at our project in Moggill. Later that night my wife noticed me scratching my groin but neither her querulous glances nor my casual discomfort were enough to provoke a more careful investigation in the shower.

Next morning, after another shower but no further examinations, I departed on an interstate trip. Late that night I retired to my room and taking a shower was bemused to discover a somnolent paralysis tick resting in my nether parts. What to do?? Far too late to find a pharmacy, not serious enough by any means to warrant hours waiting at the emergency ward at the local hospital.

Floods of relief covered their faces. ‘Let’s see what we can find,’ volunteered one.

For the next fifteen minutes they scoured under the reception desk, the cleaners’ cupboards and kitchens searching for something that would deal with all our discomforts. Nothing turned up save a citrus-based commercial grade  benchtop cleaner, which I was having third thoughts about as we each stood racking our brains on what to do next. ‘Aha!’ exclaimed one. ‘How about some vodka?’

Now some of you may have seen a group email recently extolling the use of vodka as the more  sophisticated answer to all of life’s cleaning, staining, healing problems. It is being promoted as the 21st century replacement for Windex as the miracle substance propounded by Dad in ‘My Fabulous Fat Greek Wedding’ a few years ago. Well off to the bar she trotted and presented me with a complimentary triple shot of vodka in a small glass.

‘I won’t need anything like that amount,’ I volunteered, ‘just enough for a few dabs.’         ‘I thought you might like to drink the rest after the treatment,’ she confessed and gingerly pushed the glass towards me with an abashed glance.

Back in my room I began with a tentative dab at the offending mite, expecting to have instant racking pain from any foreign substance like alcohol coming in contact with my groin. Those male readers who have mistakenly applied substances to that area like after-shave will appreciate my caution. Well, it was pain-free and after three more applications during the night and early morning I rose to greet a clearly dead-drunk body invader in the shower. It didn’t fall off but a couple of hours later (when I could buy the tweezers from a chemist) it pulled off easily – no lumps, nor residual poison, no itching.

So perhaps the tick problem can be solved by getting them pissed as newts as quickly as possible with some judicious applications of quality vodka. On what to do with the remains of the dose, I leave that to the applicant’s discretion. 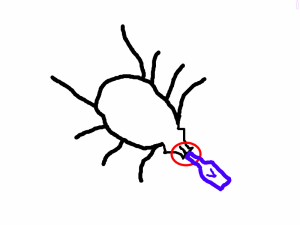 which provides a much more comprehensive treatment:

Ticks and tick-borne diseases protecting yourself

In particular it advises the use of Wart-Off Freeze (or Aerostart) as opposed to using flyspray on the attached tick.

This entry was posted in Diary: Rain and Planting and Observations of Wildlife and tagged flyspray, guinea fowl, paraysis tick, tick. Bookmark the permalink.