Whist I was digging up weeds in the side paddock I was struck by something new floating in the dam. From a distance I  first thought it must be a dead bird … 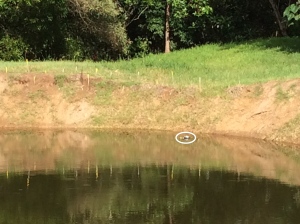 a dead bird? a stone?

and then I wondered as I got closer whether it could be a dead turtle floating upside down as this has happened once before… the shape seemed to be changing. 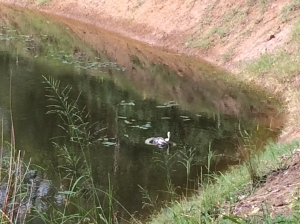 was something lifting upwards?

that pattern looks familiar but what’s it doing in the water?

a death roll for an unknown creature

And then all was revealed – it’s not a bird, it’s not a stone or even a turtle, 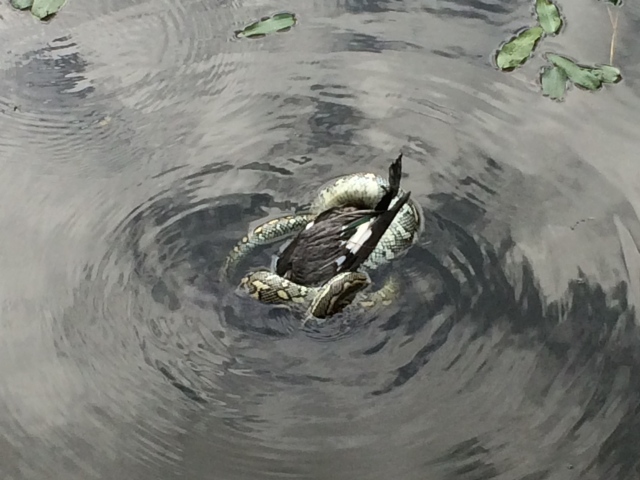 It’s a Carpet Python strangling a Pacific Black Duck as shown by its metallic green under- feathers! Yes, those are its feet sticking up in the air.

In one sense I was relieved that it was not another casualty from a particular Australian Wood Duck family that started with 9 ducklings but now is down to 5. Obviously I was wrong in thinking that they were large enough (almost as big as parents) and safe enough from predators (on the dam). 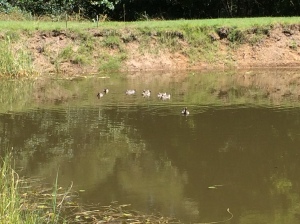 Carpet Pythons must be finding plenty of food at our place. We know a carpet python had eaten 2 nests of eggs laid in 2 different places by our female Guinea, Pip. And a third batch she laid were broken into by crows. Eventually she found a safer place and laid another 18 eggs. Yesterday they hatched but we are wondering about their chances of survival. 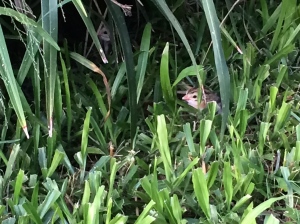 one or two keets or guinea fowl chicks

In the past I have seen crows attack a keet and kill it. A visiting farrier told me that Kookaburras are quick to pounce on keets. And there are currently some kites or hawks in the area – one of these had killed our other female guinea a year or so ago. As I was driving down our driveway just the other day I saw 3 large dark kites together on the ground of our front paddock. They rose up into the air as I passed by. When I returned home I found white feathers over the drive and we surmise that kites must have killed one of the white Cattle Egret which visit the horse paddock.

We really have come to experience how it is a battle for survival for  birds . Ian buried an Australian White Ibis just this week. One of its legs was dangling uselessly and we are unsure of how it became injured. It could only hop or fly and not graze amongst the grass as is usual. It became progressively weaker and sheltered by sitting at the base of our magnificent White Fig (Ficus virens), nestled amid the fallen leaves. At least it died peacefully there. There are many Wood Ducks all around Moggill Pocket and in the afternoon traffic ‘rush’ last week, one was scuttled on the road outside our place so Ian did the honours of burying yet another bird. Not to mention how in the same week he buried a beautiful Channel-billed Cuckoo lying beneath the fruit-laden Ficus benjamina var. comosa – probably attacked and killed by crows (Torresian Crows).

Crows are a vital part of the ecosystem on our property and we value them highly. At the moment they are joining our resident Magpies, Peewees and Guinea Fowl in doing a  wonderful job of patrolling lawn grubs so we don’t have to deal with them ourselves.

crows snapping up the easy pickings

In celebration of Crows here’s a link to a BBC Two video clip Inside the Animal Mind: Episode 2 showing the intelligence of crows Are Crows the Ultimate Problem Solvers?

Postscript on carpet pythons. Our Land For Wildlife Officer tells us that, ‘Pythons are very comfortable in the water, so catching and eating something there is quite normal.’