Everybody loves a grevillea.

The Grevillea Robyn Gordon has been a great favourite with Australian gardeners for many years because it can flower all year round, it is suited to dry conditions and can stand in the full sun. It can grow into a lovely 2m x 3m dense shrub and attracts nectar-feeding birds.

In Autumn 2012 we happened to read that it was possible to take cuttings in that actual season and so we took a dozen  8-10 cm long semi-hardwood cuttings and trimmed the leaves off the lower half and placed the stems into tubes filled with potting mix which we watered daily for a couple of months until new growth started appearing. In Spring we planted them in several of the house gardens and watered them occasionally. 4 thrived. This was encouraging as buying 4 grevilleas at a local nursery would have cost around $50.

a tray of grevillea cuttings

Having this success we next collected seeds and stored them in paper bags and experimented with placing them in tubes in springtime. Eventually some germinated. 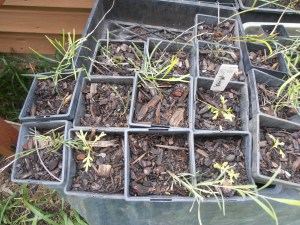 And so began a drive to establish more and more of the particular varieties that were already thriving – along the driveways, in the triangle garden, on the west side of the pool – into yet more areas such as under the coral tree, in the clothesline garden and the front fence garden.We have continued propagating our original stock as well as getting other gorgeous grevillea hybrids to add to our jute mat area, the poolside area and the barbed-wire grass area in the side paddock.

We actually designated the year 2014 as our Grevillea Year in order to provide more food and habitat for native bids, reptiles and insects.

And in that spirit we have been in the process of transforming the main front garden. 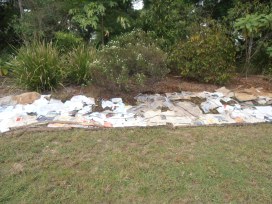 preparing one third of the site

starting to mulch up this part 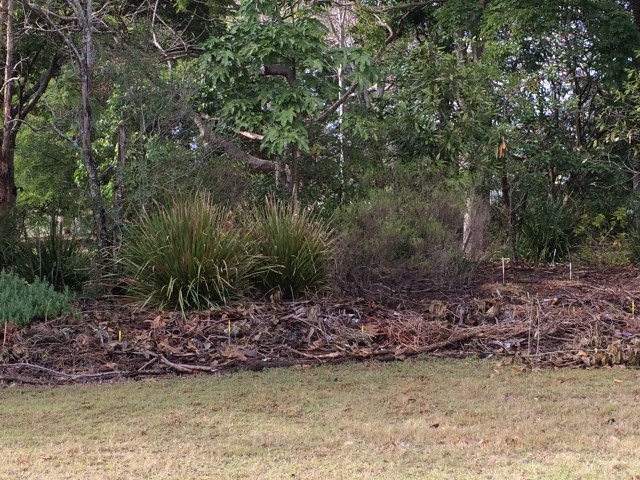 grevilleas added to the middle section 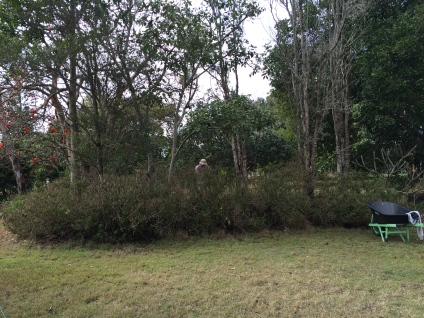 the final section where old daisy bushes needed to be removed …

…was the hardest section 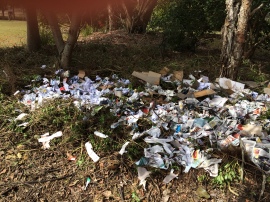 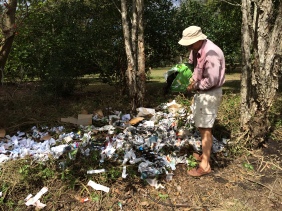 Ian planted the new grevilleas in 3 rows with some prostrate varieties in the front. The whole front garden faces into the western sun and has been a difficult place for other plants to survive which is why we decided to try grevilleas which do well in full sun. So we will be nurturing them with lots of water until they are properly established. Even though older grevillea shrubs are hardy they still need an occasional long drink of water during extended dry periods.  And Ian is also following the advice of pruning the established varieties to maintain a nicely-shaped bushy shrub.

Here are the names of some of the hybrids in this final section of the front garden – Juniperina, Bronze Rambler, Superb, Splendour, Red Sunset, Strawberry Sundae and someone thought that the ockerism, Ridgey Didge, was worthy of a native plant! This last grevillea is a hybrid of G. banksii alba and G. bipinnatifida  – whereas the Robyn Gordon is a cross between a red-flowered form of G. banksii and G. bipinnatifida.

Happy Planting! Spring is in the air at Moggill as birds are zooming everywhere in pairs!