On 1st Dec 2011 we buy 6 guinea fowl in two shades of colour as we have read how their diet mostly consists of insects – including paralysis ticks! 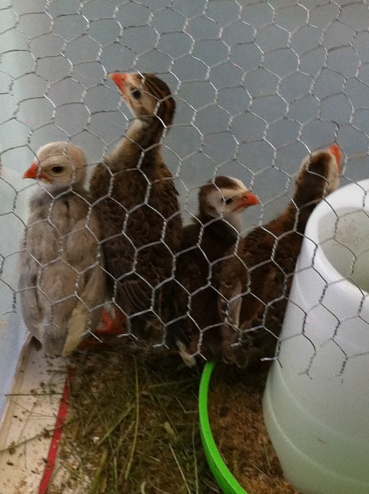 After a few weeks we move them to bigger cage but in the first night a carpet python must come (there is a slithering mark under one corner) and eat all but the 2 smallest ones. We immediately go and buy more wire for underneath cage. We are unsure yet as to their sex so we name the darker one Winnie (wild pearl grey with white chest feathers- pied) and the pale lavender one, Chick.

These 2 become quite tame, being fed with our chooks which free range in the front paddock. Ian builds a flat feeding tray on top of a fencepost for them. They roost in the top of a silky oak tree on the fence line. They also spend time over near the house. (See end of April 2012) And it is now obvious that Winnie is a male (with his bigger red and white wattles hanging from his face) and Chick is a female. (Only the female makes a noise that has been described as sounding like ‘buck-wheat, buck-wheat’.)

But a new problem develops when Chick begins laying eggs – Winnie starts attacking the horses in the paddock by flying with his sharp beak into their chests and legs, drawing blood! (One owner puts a mesh shield over her horse’s eyes.) Chick goes on to lay 42 eggs but never shows any sign of remaining on the nest. I put some under a clucky hen in the chook house but when 3  hatch they do not survive.

Early one morning we wake to a big commotion in our side paddock – Winnie is screeching. On investigation we find a pile of  Chick’s beautiful feathers on the ground near the gate. The next day we are out in the side paddock and hear a host of small birds twittering and squawking and look up to see an eagle swooping above the gate!! So that explains what happened and now we are down to 1 guinea.

Winnie mourns Chick for days – sitting on the gate and calling for her.He is forlorn and spends most of his days on the veranda following us from window to window as we move from room to room.

lonely and lost without his mate

watching our every move

I can’t bear to see him like this so I purchase 2 more – both pearl grey – and so there are 3.

1 escapes when I am putting food into the cage and the crows swoop and kill it in the blink of an eye. We get a new cage and put Winnie in with the remaining chick and place the cage over in a bushy area in the hope that Winnie will forget the front paddock and live down on the western side of the property where most of the ticks occur. 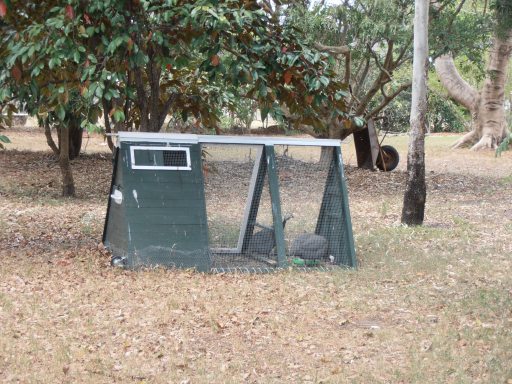 bonding in the new cage

However a brush turkey starts visiting to eat seeds which are scattered on the ground as we move the cage from place to place to give them new grass. It all gets exhausting – carrying the water and food, covering them with tarps at night because a fox has recently killed dear old Poppy, one of our Sussex hens.

So after more than a month I decide they have been there long enough and let them out of their cage – in a flash Winnie is up in a tree. 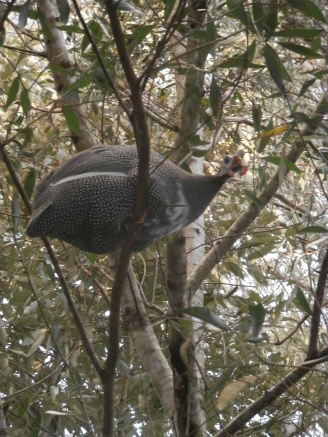 And within a few hours he has led Pip back to his old stamping ground. Winnie settles into a routine of huddling around the veranda and pecking on the lawns with occasional forays into the front paddock, then roosting on the chimney at night. We are spending too much time hosing down the veranda, not to mention the roof! 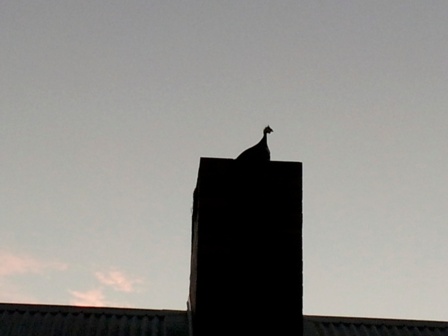 So we bring the cage back to the front paddock and eventually lure them into it. However one morning we are shocked to see that all their food and water is strewn around and  Winnie has dry blood over most of his head – perhaps they have had a terrifying night, perhaps a fox, a python, a dog or cat was prowling around their cage. Pip would have hidden in the end of the cage with the wooden hutch but perhaps Winnie was repeatedly flapping into the top of the cage and the wire eventually wore away the little fleshy knob on top of his head. 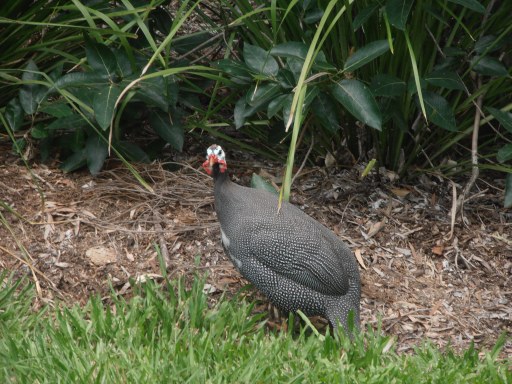 So we release them and feed them only in the side paddock (with wild bird seeds) and Pip now takes charge as she wants nothing more to do with the front paddock or the house, its verandas, its chimney or that hose!

At last the saga may be coming to resemble our dream –  2 guinea fowl grazing in the grass and bushy areas and gobbling up some ticks.

The lesson from all this – don’t get too friendly with a guinea fowl! 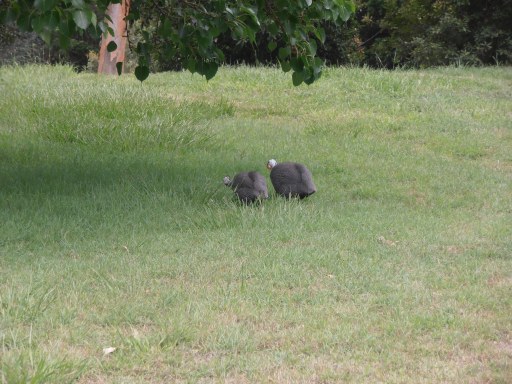 grazing peacefully as we had originally hoped

Postscript: Pip has laid  a whole clutch of eggs in the tall grass and she is sitting on them like a very good mother. 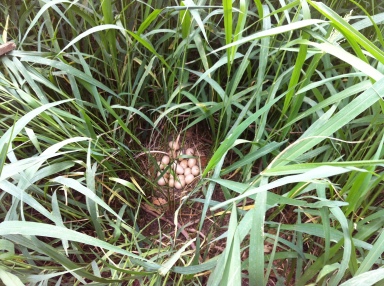 But do we really want to have more than 2 guineas beep-beeping and shriek-shrieking all over the property?!

This entry was posted in Diary: Rain and Planting and Observations of Wildlife and tagged brush turkey, guinea, guinea fowl, paraysis tick, ticks. Bookmark the permalink.

3 Responses to First there were 6, then …